Zechariah 4:1-3 a candlestick all of gold, with a bowl upon the top of it 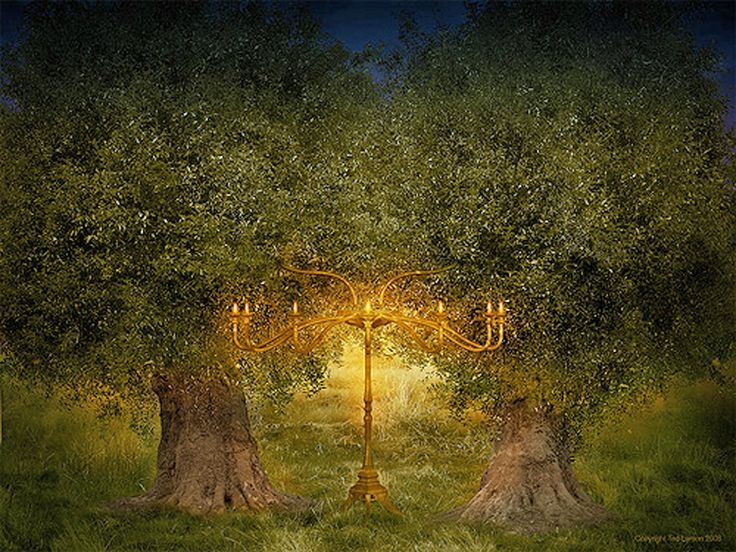 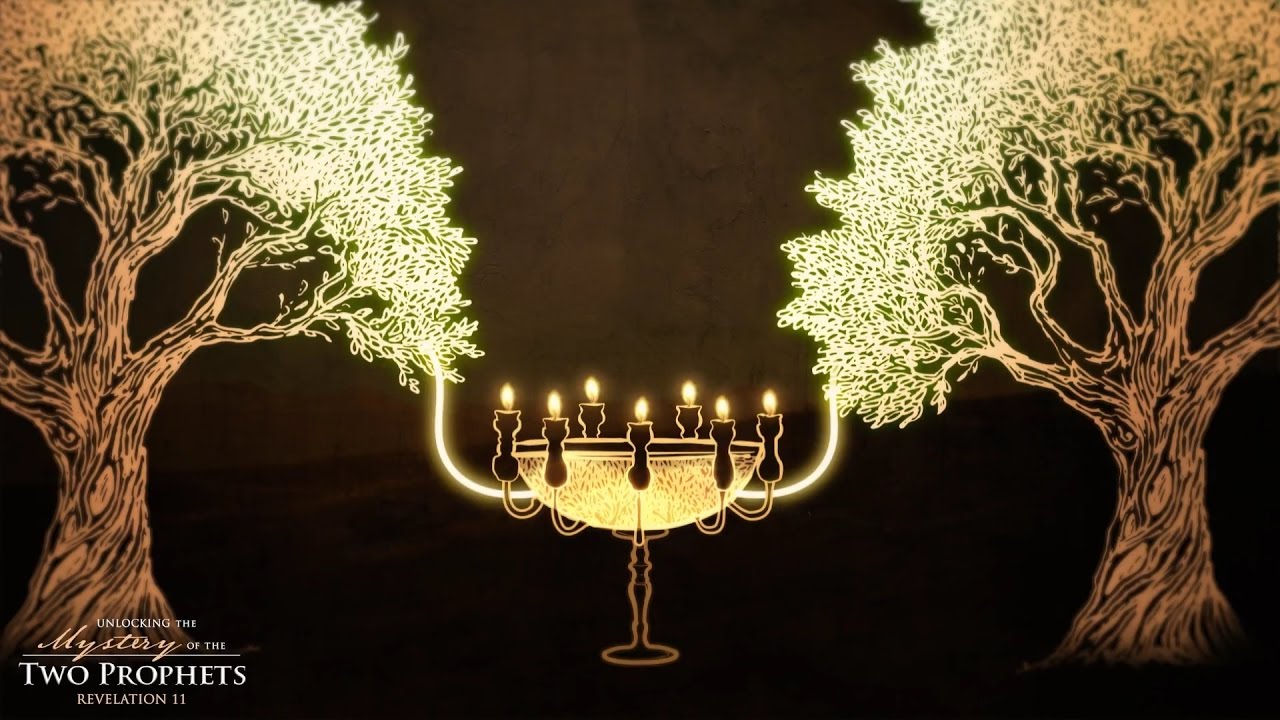 The candlestick is made of gold.  There is a bowl which holds the golden oil supplied by the two Olive Trees so that the candles never dim.

Zechariah 4:5 Knowest thou not what these be?

The angel seems to infer that Zechariah should have known what these images represent, or at least that the angel was surprised that Zechariah asked for an interpretation. To an angel, they may have been familiar heavenly images, but to a mortal—even a prophet—the meaning is certainly not clear.  The angel’s answer is indirect.

Zechariah 4:6 Not by might, nor by power, but by my spirit

What’s the message?  Jerusalem’s Temple would be finished and her walls rebuilt, but it would not be done in dramatic fashion.  When the spirit of the Lord moves upon the hearts of men, great things happen.  The accomplishments may not seem miraculous, but the Lord has worked his magic through the power of His Spirit.

Question: "Why is it that we use oil in administering to the sick? There is no reference in the Doctrine and Covenants directing its use. In our discussions this question has been raised, and why some other oil would not answer just as well as olive oil? When was this practice of anointing with oil introduced?"

Answer: We use olive oil in administering to the sick because the Lord has instructed it. It is true there is no mention in the Doctrine and Covenants to the use of oil in administering to the sick, but there are references to the anointing with oil in the conferring of authority and sacred blessings. This practice has come down to us from the time of the organization of the Church, according to the pattern anciently given. It was an olive leaf that the dove brought to Noah indicating that the water of the flood was abated. From that time on the olive leaf or branch and the dove have been emblems of peace and purity. In many parables in the scripture, the olive tree is mentioned as symbolic of righteousness and having reference to the kingdom of God or the Church. In the fifth chapter of Jacob, in the Book of Mormon, is found a prophetic parable of the planting of branches of the "tame olive tree," or the house of Israel, in various corners of the earth, and how, when they grew and bore fruit and commenced to decay, the husbandman grafted into these branches of the main tree branches from the wild olive to see if they would revive. This parable portrays the scattering of Israel through the ages and is intensely interesting. Likewise, we find in the Doctrine and Covenants, Section 101, there is a parable of the planting of twelve olive trees in the Lord's vineyard. This also has prophetic meaning. In "Rev. 11:4Revelation 11:4, the Lord speaks of his two witnesses as two olive trees, and in Zechariah 4:11-14 is a similar prophetic parable. So we find through all the prophetic writings that olive trees and olive oil are emblems of sacredness and purity. (Answers to Gospel Questions, 5 vols. [Salt Lake City: Deseret Book Co., 1957-1966], 1: 150)

Figuratively speaking, Zerubbabel will have great power to accomplish his designs.  He will have power equal to turning a great mountain into a perfectly level plain and pronouncing the epitaph upon the mountain.

Zechariah 4:9 the hands of Zerubbabel have laid the foundation of this house; his hands shall also finish it

This is the take home message of this entire vision:  Zerubbabel may resume construction of the Temple with the Lord’s approbation.  The Lord is on his side, and the Spirit will be in his heart.

Zechariah 4:10 For who hath despised the day of small things?

The angel intimates that perhaps there have been some grumblings among the people.  Already some of Zerubbabel’s band lamented that the early features of the Temple were greatly inferior to that of Solomon’s Temple (Ezra 3:12).  Then, on top of that, the construction had been halted by their new enemy, the Samaritans.  Perhaps, like their forefathers coming out of Egypt, some of them lamented, “What good has it been to come back to Jerusalem?  We are a small group, surrounded by our enemies, without a Temple, and without protection.  This is not a time of great accomplishments, but of small steps. Are they even worth it?”

Any whining will be turned to joy, because Zerubabbel will set the plummet again to finish the Temple.  Not only that, but there will protection from the Lord by seven angels who “are the eyes of the Lord, which run to and fro through the whole earth.”

Brethren, you are in the pathway to eternal fame, and immortal glory; and inasmuch as you feel interested for the covenant people of the Lord, the God of their fathers shall bless you. Do not be discouraged on account of the greatness of the work; only be humble and faithful, and then you can say, “What art thou, O great mountain! before Zerubbabel shalt thou be brought down.” He who scattered Israel has promised to gather them; therefore inasmuch as you are to be instrumental in this great work, He will endow you with power, wisdom, might and intelligence, and every qualification necessary; while your minds will expand wider and wider, until you can circumscribe the earth and the heavens, reach forth into eternity, and contemplate the mighty acts of Jehovah in all their variety and glory. (Teachings of the Prophet Joseph Smith, 163)

Zechariah 4:10 those seven; they are the eyes of the Lord

In the last chapter, Zechariah saw a stone with seven eyes.  Now he sees a candle with seven lamps.  Both represent watchful angels who “run to and fro through the whole earth.”  Who are they?

The identity of these seven watchful angels is not known, but this is a good time to introduce the idea of archangels to the reader.  An apocryphal book, the Book of Enoch, describes seven archangels.  Our Latter-day scriptures speak of three of these:  Michael, Gabriel, and Raphael (D&C 128:21).  The other four listed in the Book of Enoch are:   Uriel, Raguel, Sarakiel, and Remiel.  Interestingly, one of the listed duties of the archangels is to watch; “the most popular tradition was borrowed from chapter XX [of the Book of Enoch], in which a list of seven angels who watch is given as: Uriel, Raphael, Raguel, Michael, Sarakiel, Gabriel, and Remiel.” (http://en.wikipedia.org/wiki/Seven_Archangels italics added)

Zechariah 4:14 These are the two anointed ones, that stand by the Lord of the whole earth

In Revelation 11, we learn of two prophets who are to preach in Jerusalem before the Second Coming.  They are referred with similar language, “These are the two olive trees, and the two candlesticks standing before the God of the earth.” (Rev. 11:4)  But Zechariah only sees one candlestick, so it is hard to know for sure whether they can be equated.

Another reference to the individuals who stand by the Lord is given in Matthew, when James and John’s mother ask if they can’t be placed on either side of Him in the kingdom.  To which he replies, it “is not mine to give, but it shall be given to them for whom it is prepared of my Father” (Matt 20:23).  Whoever they are; they are pretty special.  It is frustrating that we can’t definitely identify them.