1) The walls of Jerusalem

2) The gathering out of Persia

3) The Lord to dwell in Jerusalem

Zechariah 2:1-2 a man with a measuring line in his hand… To measure Jerusalem

Ezekiel was a generation older than Zechariah and prophesied during the Babylonian Captivity.  Like Zedekiah, he was shown an angel with a measuring instrument (Ezek. 40:3).  His angel was measuring the dimensions of the Millennial Temple (Ezek. 42).  Zechariah’s measuring man is focused on one thing—the walls of Jerusalem.

Rumor has it that when Joseph Smith was translating the Book of Mormon, the mention of a city wall around Jerusalem was news to him (1 Ne. 4:4).  Well, the walls that Nephi, Sam, Laman, and Lemuel hid outside were no longer standing in the days of Zechariah.  They had been destroyed by the Babylonians.  This left Jerusalem dangerously exposed.  Historically, the walls of Jerusalem had been a great protection to the kingdom (see Isaiah 36-37).

When Zerubbabel, Zechariah and company returned to Jerusalem, their first project was to rebuild the Temple.  They were well underway when construction was halted.  Apparently, the walls of the city were in terrible disrepair at this time. Zechariah’s angel has come to convey the idea that the walls of the city need to be rebuilt as well as the Temple.  At this time, the dimensions of the Temple were already set.  The foreordained dimensions of the walls were revealed to Zechariah.  They would come to be known as The First Wall.

“After the Babylonian captivity and the Persian conquest of Babylonia, Cyrus II of Persia allowed the Jews to return to Judea and rebuild the Temple. The construction was finished in 516 BCE or 430 BCE. Then, Artaxerxes I or possibly Darius II allowed Ezra and Nehemiah to return and rebuild the city's walls and to govern Judea, which was ruled as Yehud province under the Persians. During the Second Temple period, especially during the Hasmonean period, the city walls were expanded and renovated, constituting what Josephus calls the First Wall. Herod the Great added what Josephus called the Second Wall somewhere in the area between today's Jaffa Gate and Temple Mount. Agrippa I (r. 41–44 CE) later began the construction of the Third Wall, which was completed just at the beginning of the First Jewish–Roman War… In 70 CE, as a result of the Roman siege during the First Jewish–Roman War, the walls were almost completely destroyed. Jerusalem would remain in ruins for some six decades and without protective walls for over two centuries.” (https://en.wikipedia.org/wiki/Walls_of_Jerusalem) 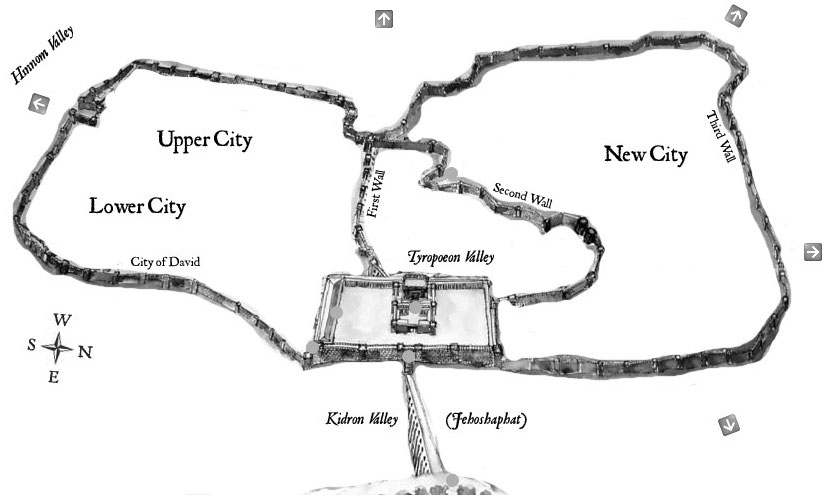 Zechariah 2:4-5 Jerusalem shall be inhabited as towns without walls for the multitude

How stark is the contrast between Zechariah’s reality and this prophecy!  Zechariah’s company is not much bigger than 42,000 (Ezra 2:64), yet the angel prophesies of a time when Jerusalem’s walls will not be big enough for all the inhabitants.  When will this prophecy be fulfilled?

In the time of Christ, thousands of Jews from the entire Roman Empire, made pilgrimages to Jerusalem for the feast of Passover, the feast of Tabernacles, and the feast of Weeks (Pentecost).  During those feasts, the walls of Jerusalem were not sufficient to contain all the Jews that were there, but Zechariah’s angel is seeing a time yet future—when the visitors to Jerusalem will be much greater than ever before. When the Messiah comes again, Jerusalem will regain its worldwide prominence as the focus of the world.  Its walls will not be large enough to contain all those who want to visit.  Indeed, the walls will be irrelevant and unnecessary because the Lord Himself will serve as protection with a wall of fire round about.  It was probably Thomas Ward who explained, “Here the angel informs us, that Jerusalem, after the work accomplished by the carpenters, will be inhabited as towns without walls—in an age of the world when walls would no more be used as a matter of defence—and the Jews would be gathered together in villages, according to their different languages.” (Latter-day Saints' Millennial Star, vol. 7 (January 1846-June 1846), No. 2. January 15, 1846. Vol. Vii. 26)

Zechariah 2:6 I have spread your abroad as the four winds of the heaven

The first recorded instance of the gathering of Israel is the return of Zerubbabel, Jeshua the high priest, Zechariah and company from Babylon (Ezra 1).  It is the beginning of a long and difficult task for which the Lord Himself takes responsibility.  We are merely the hired servants, the under-shepherds, the manual laborers for pruning, digging, and nourishing. He recruits us as servants, but he is the Lord of the vineyard (Jacob 5). The gathering will continue until the Restitution of all things—the re-establishment of Jerusalem, Zion, and the fulfillment of the promises given to Abraham regarding his posterity (Gen. 13:14-17; 15:18; 49:22-26).

Zechariah 2:7 Zion, that dwellest with the daughter of Babylon

Zechariah 2:8-9 After the glory hath he sent me unto the nations which spoiled you

To paraphrase this verse, “After king Nebuchadnezzar and the Babylonians were given their glory days, I the Lord came punish them for their deeds.  If they touch the apple of my eye (children of Israel), they will pay a price at the hands of Cyrus and the Persians.  I will make slaves of your masters and you will know that it is I, the Lord, that has done it.”

Zechariah 2:10 Sing and rejoice…for, lo, I come, and I will dwell in the midst of thee, saith the Lord

Over and over again, Isaiah prophesied that the Lord would come and dwell in Zion.  Zechariah repeats this great promise as the culmination—the great and grand blessing for which all the work will be worth it.  “Finish the Temple, rebuild the walls of Jerusalem, dwell in righteousness in Zion.”  What is the ultimate goal?  It is to prepare Jerusalem and Zion for their ultimate redemption, when the God of Israel condescends to dwell with his people.  Now that is a motivator!  God is going to leave his throne on high and literally live with his people.  This is the promise of the Messiah.  This is what the Jews were looking for when Jesus of Nazareth started preaching in Galilee.  The Holy One of Israel came once and dwelt with his people, and He was rejected.  But He will come again according to the prophecies of Isaiah and Zechariah with all the drama that is promised (D&C 45:51-53).

Zechariah 2:11-12 many nations shall be joined to the Lord in that day

“Many nations are to be joined to the Lord, and of course, to his people in that day. And in their rejoicing will the Lord come and dwell in their midst. This is to be the comfort and consolation of the people of Zion in the last days. They shall be called upon to gather out and deliver themselves from the daughter of Babylon, that he might shake his hand upon them and chasten them, by making them a spoil—a spoil to their servants (slaves). During which time many nations of the house of Israel shall be joined to the Lord, that he might come and dwell in their midst, and they be made to know that God hath sent his servants unto them with the fulness of his Gospel, according to the 7th chapter of Nephi, in the Book of Mormon, page 474, third edition (3 Ne. 16:10-12).

“And thus commandeth the Father, that I should say unto you at that day when the Gentiles shall sin against my gospel, and shall be lifted up in the pride of their hearts above all nations, and above all the people of the whole earth, and shall be filled with all manner of lyings, and of deceits, and of mischiefs, and all manner of hypocrisy, and murders, and priestcrafts, and whoredoms, and of secret abominations; and if they shall do all those things, and shall reject the fulness of my gospel, behold, saith the Father, I will bring the fulness of my gospel from among them; and then will I remember my covenant which I have made unto my people, O house of Israel, and I will bring my gospel unto them: and I will show unto thee, O house of Israel, that the Gentiles shall not have power over you, but I will remember my covenant unto you, O house of Israel, and ye shall come unto the knowledge of the fulness of my gospel. (Latter-day Saints' Millennial Star, vol. 7 (January 1846-June 1846), No. 2. January 15, 1846. Vol. Vii. 26.)