Zerubbabel was the governor over Jerusalem. He was the leader of the first remnant that returned from Babylon.   Joshua, also called Jeshua or Jesus, was the high priest,

And when the seventh month was come…

then stood up Jeshua the son of Jozadak, and his brethren the priests… and builded the altar of the God of Israel, to offer burnt offerings thereon...

They kept also the feast of tabernacles…

Prior to the Babylonian Captivity, there had been great wickedness among the priests, and the high priest had allowed the desecration of the Temple (Jer. 5:31; 6:13; 7:28-31).  As the Lord brings the Jews back, it is extremely important that the Priesthood is honorable in all things.  Joshua, the high priest, has the Lord’s blessing as seen in Zechariah’s vision.  He must be doing something right if Satan is standing on his right hand to resist him.

Joshua stands before the angel of the Lord with Satan there to resist him.  One way to know you are doing the Lord’s will is if Satan is against you. Joshua was doing just that.

“In the period in which we now live, the gathering of the house of Israel and the establishment of Zion have commenced. Satan's forces, in a variety of manifestations, are engaged in relentless battle against Israel, that is, against individual Saints and the Church collectively. As other scriptures teach us, their efforts will increase in intensity as the coming of Christ draws near (1 Ne. 14:11-14).” (Kent P. Jackson, ed., Studies in Scripture, Vol. 4: 1 Kings to Malachi [Salt Lake City: Deseret Book Co., 1993], 311)

Zechariah 3:2 is not this a brand plucked out of the fire?

How thankful, then, we should be that this Gospel and the light of revelation have reached our minds, and caused our bosoms to vibrate with the inspirations of the Holy Spirit. The welcome sound and accompanying power have plucked us as brands from the burning. Then do you not feel thankful that we have this blessed privilege, and that we had understanding enough left with us when this Gospel reached our ears to embrace it? (Journal of Discourses, 8:372)

Hyrum Smith’s son Joseph F. was called to serve a mission to Hawaii at the age of 15.  He reports a dream that teaches the same principle.

I was very much oppressed [when I was] on a mission. I was almost naked and entirely friendless, except [for] the friendship of a poor, benighted … people. I felt as if I was so debased in my condition of poverty, lack of intelligence and knowledge, just a boy, that I hardly dared look a … man in the face.

While in that condition I dreamed [one night] that I was on a journey, and I was impressed that I ought to hurry—hurry with all my might, for fear I might be too late. I rushed on my way as fast as I possibly could, and I was only conscious of having just a little bundle, a handkerchief with a small bundle wrapped in it. I did not realize … what it was, when I was hurrying as fast as I could; but finally I came to a wonderful mansion. … I thought I knew that was my destination. As I passed towards it, as fast as I could, I saw a notice [which read B-A-T-H], “Bath.” I turned aside quickly and went into the bath and washed myself clean. I opened up this little bundle that I had, and there was [some] white, clean [clothing], a thing I had not seen for a long time, because the people I was with did not think very much of making things exceedingly clean. But my [clothing was] clean, and I put [it] on. Then I rushed to what appeared to be a great opening, or door. I knocked and the door opened, and the man who stood there was the Prophet Joseph Smith. He looked at me a little reprovingly, and the first words he said: “Joseph, you are late.” Yet I took confidence and [replied]:

He clasped my hand and drew me in, then closed the great door. (www.lds.org/general-conference/2007/04/i-am-clean?lang=eng)

Zechariah 3:5 Let them set a fair mitre upon his head

Mitre of the High Priest with the inscription in Hebrew, “Holiness to the Lord”

Zechariah 3:5 So they… clothed him with garments

These are Temple doctrines with Temple symbolism.  “And thou shalt bring Aaron and his sons unto the door of the tabernacle of the congregation, and wash them with water.  And thou shalt put upon Aaron the holy garments, and anoint him, and sanctify him; that he may minister unto me in the priest’s office.” (Ex. 40:12-13)

“The Bible describes the ceremony in which Aaron and his sons were ordained to the priesthood at the tabernacle. They were washed with water, dressed in ‘the holy garments,’ anointed and consecrated (Exodus 28:40-41; 29:4-9; 40:12-15; Leviticus 8:12-13, 30; Psalm 133:2; Ben Sirach 45:8-15). This investiture was partially repeated each time the priests prepared for service, when they were required to wash and don the ‘holy garments’ (Leviticus 16:3-4), which they then removed after completing the ordinances of the tabernacle or the temple (see Leviticus 16:23-24). Dressing in special clothing in the temple denotes a change in role, from that of mortal to immortal, from ordinary human to priest or priestess, king or queen. A number of ancient texts, both in the Bible and elsewhere, discuss temple clothing, its symbolism and some of its uses.

“Perhaps the most impressive investiture account is the one ascribed to Levi, ancestor of Moses and Aaron, in a vision at Beth-El, where his father Jacob had experienced his dream of the ladder ascending into heaven.

And I saw seven men in white clothing, who were saying to me, "Arise, put on the vestments of the priesthood, the crown of righteousness, the oracle of understanding, the robe of truth, the breastplate of faith, the miter for the head, and the apron for prophetic power.  Each carried one of these and put them on me and said, "From now on be a priest, you and all your posterity." The first anointed me with holy oil and gave me a staff. The second washed me with pure water, fed me by hand with bread and holy wine, and put on me a holy and glorious vestment. The third put on me something made of linen, like an ephod. The fourth placed . . . around me a girdle which was like purple. The fifth gave me a branch of rich olive wood. The sixth placed a wreath on my head. The seventh placed the priestly diadem on me and filled my hands with incense, in order that I might serve as priest for the Lord God. (Donald W. Parry, ed., Temples of the Ancient World: Ritual and Symbolism [Salt Lake City and Provo: Deseret Book Co., Foundation for Ancient Research and Mormon Studies, 1994], 667) 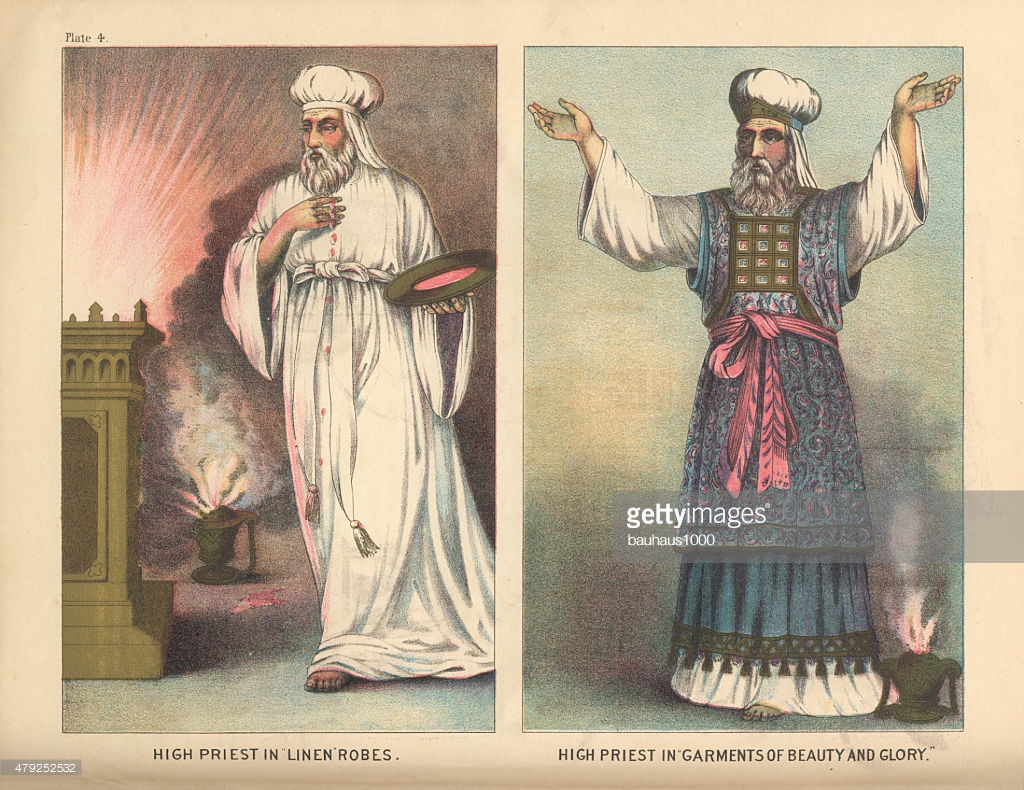 Zechariah 3:7 I will give thee places to walk among these that stand by

In other words, “if you are faithful to your office and calling as High Priest in Israel, you will receive a place here in my Presence among the angels in heaven.”  It is the Old Testament version of the New Testament promise, “In my Father’s house are many mansions: if it were not so, I would have told you. I go to prepare a place for you… that where I am, there ye may be also.” (John 14:2-3)

Zechariah 3:8 I will bring forth my servant the BRANCH

The servant called the Branch is none other than Jesus Christ.  This is a Messianic reference and is consistent with others who have prophesied of the Branch in this manner.

Also in the writings of Jeremiah we find the Lord's promise to reveal unto his people in the latter days… "In those days, and at that time, will I cause the Branch of righteousness to grow up unto David; and he shall execute judgment and righteousness in the land." (Jer. 33:15-16) Jeremiah's other promise was that the Lord would raise up unto David a righteous branch, a branch that would be the Seed of David. This time the promise is that he will raise up the Branch of righteousness, a Branch that is the Son of Righteousness, meaning the Son of God. In this connection be it remembered that the Book of Mormon uses the name Son of Righteousness as one of the names of Christ. Thus the Branch is to be both the Son of David, after the flesh, and the Son of God, in the eternal sense..

These words, also in Zechariah, place the reign of the Branch in its true millennial setting. "I will bring forth my servant the BRANCH," saith the Lord, "and I will remove the iniquity of that land in one day," the day of burning in which every corruptible thing shall be consumed. "In that day, saith the Lord of hosts, shall ye call every man his neighbour under the vine and under the fig tree." (Zech. 3:8-10.) These last words contain the prophetic figure of speech that describes life during the Millennium. Micah, for instance, says that during that blessed era of peace, "They shall sit every man under his vine and under his fig tree; and none shall make them afraid." (Micah 4:4.)  (The Millennial Messiah: The Second Coming of the Son of Man [Salt Lake City: Deseret Book Co., 1982], 604)

Zechariah 3:9 For behold the stone… upon one stone shall be seven eyes

The stone with seven eyes is a like a camera.  In the next chapter, the Lord explains that they eyes are the “eyes of the Lord, which run to and fro through the whole earth.” (Zech. 4:10)  The stone is the Lord’s surveillance system.  It has seven cameras which are continually watching over Joshua and the Temple. We know the Lord is always watchful.  The stone placed before Joshua is symbolic of his power to see all things.

Maybe the Medieval “all-seeing eye” symbolism should be represented with seven eyes instead of one.

Zechariah 3:10 In that day… ye shall call every man his neighbour

When the Branch comes again and rules in Jerusalem (i.e. the Second Coming), the Jews will no longer be dwelling amongst their political and religious enemies.  Every neighbor will be a friend.  That is the promise.