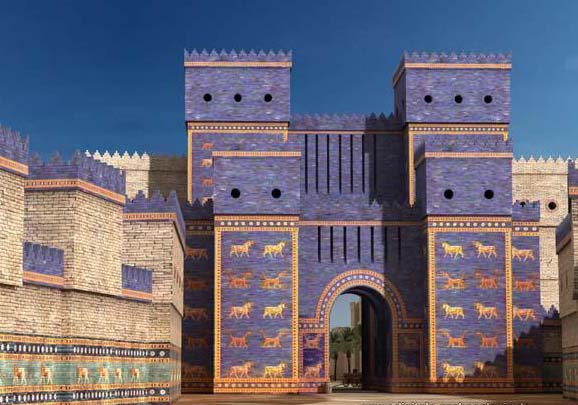 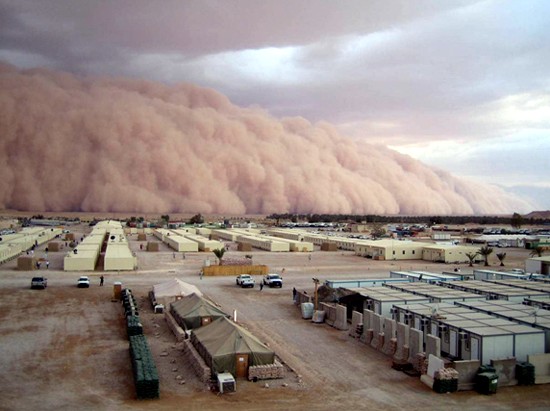 “Shamal — Accented on the second syllable, that means the ill wind that blows in summer across Iraq, and other countries in the region, stirring sandstorms in its wake…
“That same storm… coats parked cars in a tan frosting. It seeps under windowsills and doorways. It grits the teeth and stings the eyes. It clogs rifles and etches scrimshaw across sniper scopes.
“And it kills people…
“Sandstorms and their duststorm cousins are nothing new in these parts, of course. Iraq averages only 4 to just over 6 1/2 inches of rainfall a year. The Sahara Desert, which is the size of the United States, is just a short jet stream hop to the west. Iraq itself is half desert.
“The National Oceanic and Atmospheric Administration says the shamal causing the storms combines two separate weather systems. One is a sub-tropical jet stream pushing north from Arabia, the other a polar jet stream shoving south from Europe.
“When they meet, they form a northwest wind that fills the sky with sand and dust. Two of the ancients' elements, earth and air, become one. Gusts can reach 50 miles an hour. Sometimes, as happened last year and much more often in recent years, the sandstorms balloon into fronts tens of miles wide, maybe a half-mile high, that blot out the sun. (www.mcclatchydc.com/news/nation-world/world/middle-east/article24544669.html#storylink=cpy)
Jeremiah 50:17 Israel is a scattered sheep; lions have driven him away
The 12 tribes of Israel were divided into the Northern Kingdom (kingdom of Israel), composed of the 10 tribes, and the Southern Kingdom (kingdom of Judah), composed of the tribes of Judah and Benjamin.  The Assyrians destroyed the Northern Kingdom and took the 10 tribes; the Babylonians destroyed the Southern Kingdom and took them captive.  The lions of Assyria and Babylon would be punished by God.
The sheep had been scattered because they had stopped listening to the voice of their shepherd.  The Good Shepherd was more than capable of protecting them from violence at the hands of these lions.
Jeremiah 50:19-20 In those days… the iniquity of Israel shall be sought for, and there shall be none
If there is no iniquity in Israel, nor sin in Judah, you know for sure that Jeremiah is speaking of a millennial day.  The idolatry will cease, the Law of Moses with all of its rites and sacrifices will be restored, and the Lord will finally be pleased with his people.
Therefore they shall come and sing in the height of Zion… and their soul shall be as a watered garden; and they shall not sorrow anymore at all.
Then shall the virgin rejoice in the dance, both young men and old together: for I will turn their mourning into joy, and will comfort them, and make them rejoice from their sorrow.
And I will satiate the soul of the priests with fatness, and my people shall be satisfied with my goodness, saith the Lord. (Jer. 30:12-14)
It was the walls of Babylon that gave it its image of strength and impregnability.  Built around what was believed to be the decaying and tumbled down site of the ancient Tower of Babel, according to Herodotus, the walls were 300 feet high and 80 feet thick and built with an additional 35 foot deep wall foundation.  The inner walls were “not so thick as the first, but hardly less strong.”  In all the walls supported a concourse wide enough to allow a four-horse chariot room enough to turn around. (http://www.biblesearchers.com/temples/jeremiah4.shtml)
Jeremiah 50:23-30  all her men of war shall be cut off in that day
This prophecy of destruction of Babylon has been repeated many times in history.  It is not a one time prophecy—whether the Persians, the Greeks, the Medes, or the Americans—all are in fulfillment of the word of the Lord.  The phrase, “all her men of war shall be cut off in that day,” is reminiscent of the highway of death, a road between Kuwait and Bosra Iraq, highway 80, where coalition forces destroyed much of the army of Saddam Hussein on Feb. 26-27, 1991. 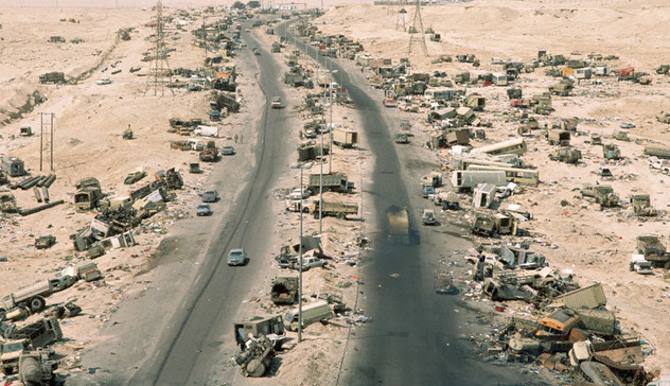 “During the United Nations coalition offensive in the Persian Gulf War, American and Canadian aircraft and ground forces attacked retreating Iraqi military personnel and others attempting to leave Kuwait on the night of February 26–27, 1991, resulting in the destruction of hundreds of vehicles and the deaths of many of their occupants…
“The 3rd Marine Aircraft Wing's A-6 Intruder aircraft blocked Highway 80, bombarding a massive vehicle column of mostly Iraqi Regular Army forces with Mk-20 Rockeye II cluster bombs, effectively boxing in the Iraqi forces in an enormous traffic jam of sitting targets for subsequent airstrikes. Over the next 10 hours, scores of U.S. Marine and U.S. Air Force aircraft and U.S. Navy pilots from USS Ranger (CV/CVA-61) attacked the convoy using a variety of ordnance. Vehicles surviving the air attacks were later engaged by arriving coalition ground units, while most of the vehicles that managed to evade the traffic jam and continued to drive on the road north were targeted individually. The road bottle-neck near the Mutla Ridge police station was reduced to a long uninterrupted line of more than 300 stuck and abandoned vehicles sometimes called the Mile of Death.”  (https://en.wikipedia.org/wiki/Highway_of_Death)
Jeremiah 50:39 It shall be no more inhabited for ever; neither shall it be dwelt in from generation to generation
Babylon was to be as Sodom and Gomorrah, a desolated wasteland where nobody lives.  The prophets speak of the destruction of Babylon in the last days (Rev. 16-18, Isa. 13-14, D&C 1:16; 133:14), but what does that mean?  Will there be a city named Babylon that will be physically destroyed?  The scriptures teach that there will not.
In the last days, the term Babylon means “wickedness” or “spiritual Babylon” (D&C 133:14), speaking spiritually and not temporally.  The actual city of Babylon, we are told, “shall be no more inhabited for ever, neither shall it be dwelt in from generation to generation.”  Does that accurately describe the ancient site of Babylon?  Is it empty?  Does anyone live there? 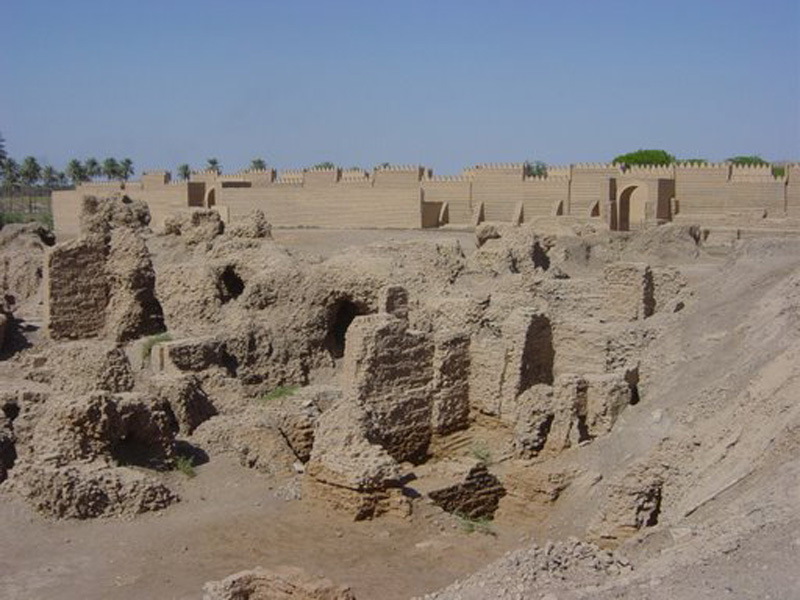 Ruins of Babylon
Like many other ancient sites, the ruins are still present in ancient Babylon.  Jeremiah said the city would not be inhabited and there is no scriptural suggestion that the city will be rebuilt.  Interestingly, great efforts have been made to restore the ruins of Babylon for tourism.  The words of Jeremiah argue against any habitation here.
“When Saddam Hussein rose to power in Iraq, he conceived a grandiose scheme to rebuild the ancient City of Babylon. Saddam Hussein said that Babylon's great palaces and the legendary hanging gardens of Babylon (one of the seven wonders of the ancient world) would rise from dust.
“Like the powerful King Nebuchadnezzar II who conquered Jerusalem 2,500 years ago, Saddam Hussein would rule over the world's greatest empire. The vaulting ambition of Saddam Hussein found expression in vaulting, and often pretentious, architecture.
“In 1982, Saddam's workers began reconstructing Babylon's most imposing building, the 600-room palace of King Nebuchadnezzar II. 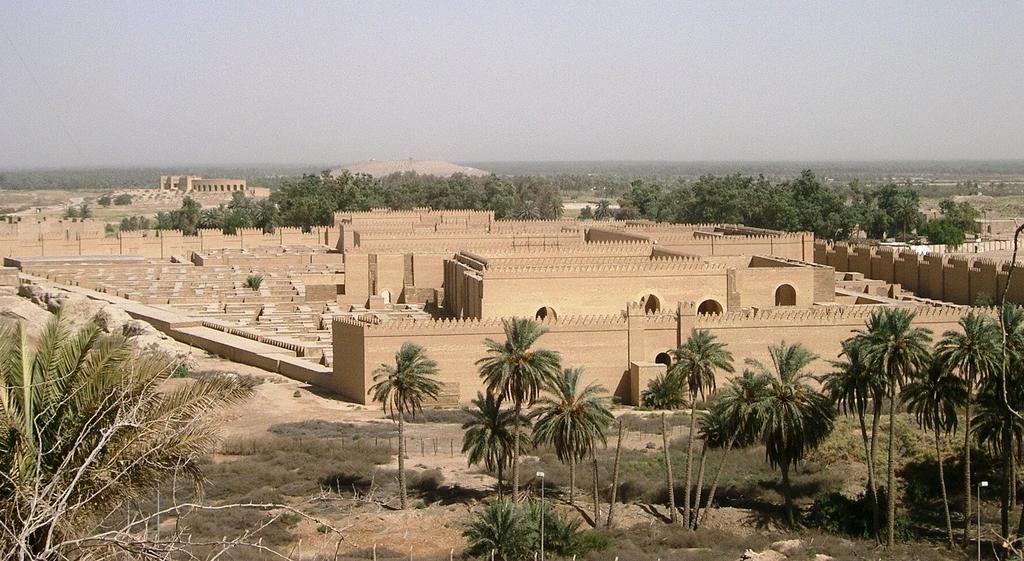 Nebuchadnezzar’s Palace
“Archaeologists were horrified. Many said that to rebuild on top of ancient artifacts does not preserve history, but disfigures it. The original bricks, which rise two or three feet from the ground, bear ancient inscriptions praising Nebuchadnezzar. Above these, Saddam Hussein's workers laid more than 60-million sand-colored bricks inscribed with the words, "In the era of Saddam Hussein, protector of Iraq, who rebuilt civilization and rebuilt Babylon." The new bricks began to crack after only ten years.
Saddam's Palace
“Adjacent to Nebuchadnezzar's ancient palace and overlooking the Euphrates River, Saddam Hussein built a new palace for himself. Shaped like a ziggurat (stepped pyramid), Saddam's Babylonian palace is a monstrous hill-top fortress surrounded by miniature palm trees and rose gardens… 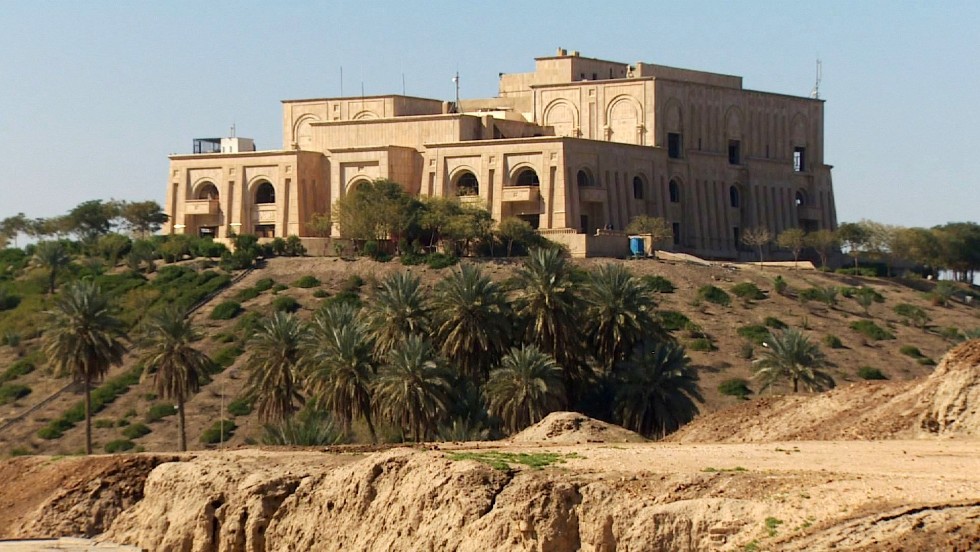 “Critics charged that Saddam Hussein's lavish new palace expressed exuberant excess in land where many died in poverty.
“On the ceilings and walls of Saddam's palace, 360-degree murals depicted scenes from ancient Babylon, Ur, and the Tower of Babel. In the cathedral-like entryway, an enormous chandelier hung from a wooden canopy carved to resemble a palm tree. In the bathrooms, the plumbing fixtures appeared to be gold-plated. Throughout Saddam Hussein's palace, pediments were engraved with the ruler's initials, "SdH."
“The role of Saddam Hussein's Babylonian palace was more symbolic than functional. When American troops entered Babylon in April, 2003, they found little evidence that the palace had been occupied or used. Saddam's fall from power brought vandals and looters. The smoked glass windows were shattered, the furnishings removed, and architectural details - from faucets to light switches - had been stripped away.” (http://architecture.about.com/cs/countriescultures/a/saddamspalace.htm)