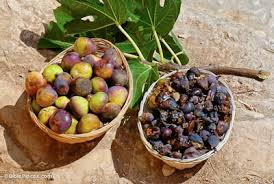 “An element of interest in Jeremiah's prophetic work is the manner in which he taught object lessons (see Teacher; Teacher Development). For instance, Jeremiah called attention to the impending fall of Jerusalem and captivity of her inhabitants by wearing the yoke of an ox (Jer. 27:2). He showed his faith in the eventual restoration of Israel to her homeland by buying a piece of land (32:1-15). He conveyed some of his messages with parables. In Jeremiah 18:1-10, the Lord inspired him to ask his listeners to observe a potter who had to rework some ‘marred’ clay. He noted that the potter represented the Lord and the marred clay the inhabitants of Jerusalem. So poignantly disturbing was this parable that some of Jeremiah's listeners began to plot against his life (18:18-23). In Jeremiah 24:1-10 he declared that the Lord showed him two baskets of figs, one good and one inedible. The good figs represented those taken captive whom the Lord would ‘acknowledge.’” (Encyclopedia of Mormonism, 1-4 vols., edited by Daniel H. Ludlow (New York: Macmillan, 1992), 722)
Jeremiah 24:5 Like these good figs, so will I acknowledge them that are carried away captive… for their good
When something bad happens, it can be difficult to understand.  The most righteous people in Jerusalem, excepting a few like Lehi and Jeremiah, are taken captive to Babylon.  Some 13,000 of the best and brightest are made as slaves.  How could something so unfair happen to the righteous?  The Lord’s plan might seem like a punishment.  It is often the same in our own lives.  When things are going wrong we may need to remember, “I, the Lord, have put forth my hand to exert the powers of heaven; ye cannot see it now, yet a little while and ye shall see it, and know that I am, and that I will come and reign with my people.” (D&C 84:119) John S. Tanner noted, “suffering may prove to be a blessing, and prosperity the trial. From personal experience no less than from scripture, we know that prosperity may test our faith and that suffering may ready us for salvation.” (“Hast Thou Considered My Servant Job?” Ensign, Dec. 1990, 49-50)
From these 13,000, the Lord is going to rebuild the Jewish nation.  They are the best blood of the land—the most likely to flourish as a believing, covenant people of the Lord.  Ezekiel was taken captive; Daniel was also taken captive.  Shadrach, Meshach, and Abed-nego were known as Hananiah, Mishael, and Azariah when they were taken captive (Dan. 1:7) They are not captured because they are wicked, but because they are good. They are the good figs in the object lesson. From them will come Malachi, John the Baptist, Jesus, and the Twelve.
Jeremiah 24:7 I will give them an heart to know me
Seventy years would pass before the descendants of these captives would return to rebuild Jerusalem.  Indeed, the good figs could plan on spending the rest of their lives in Chaldea. In the extremes of living in Babylon, they would have to learn how to be righteous.  They are a type for us—called under the covenant to righteousness, yet living in spiritual Babylon.  We all must learn to worship the true and living God while those around us are bowing to images of gold (Dan. 3:1). Like Shadrach, Meshach, and Abed-nego, we might be cast into the fiery furnace, but do we have the faith to trust in the saving power of the Son of God?
David B. Haight
It’s very clear in my mind, and I hope it is in yours, that as we live in the world of materialism, in Babylon that we live in today, and see the happenings of the world, whether you read the financial pages or the political pages or whatever, you can sense and feel that where we find our strength and where we find the answer to our challenges and our problems would be as we listen to the voice of the prophet—God’s prophet here upon the earth. (“Sustaining the Prophets,” Ensign, Nov. 1998, 36)
Jeremiah 24:8-10 And as the evil figs… I will deliver them to be removed into all the kingdoms of the earth for their hurt, to be a reproach
Who are the bad figs?  Excepting Jeremiah, Baruch, Lehi etc., they are those who are left in Jerusalem.  For the time being, they must have felt like they had been lucky to avoid Babylonian captivity.  They could continue to live in denial about the demise of Jewish society as it began to crumble around them, as clueless Laman and Lemuel, who couldn’t “believe that Jerusalem, that great city, could be destroyed according to the words of the prophets” (1 Ne. 2:13).  What can you expect from evil figs? They could “not discern the signs of” their times (Matt. 16:3).
Ultimately, they will not only be taken captive, but they will be spread all across the world or destroyed at the hands of the Babylonian army.  If we are willing to mix metaphors of figs and olives, the allegory of Zenos describes them perfectly:
…we will pluck off those main branches which are beginning to wither away, and we will cast them into the fire that they may be burned.
And behold, saith the Lord of the vineyard, I take away many of these young and tender branches, and I will graft them whithersoever I will; and it mattereth not that if it s o be that the root of this tree will perish, I may preserve the fruit thereof unto myself…
And it came to pass that the Lord of the vineyard went his way and hid the natural branches of the tame olive-tree in the nethermost parts of the vineyard, some in one and some in another, according to his will and pleasure. (Jacob. 5:7-8, 14)