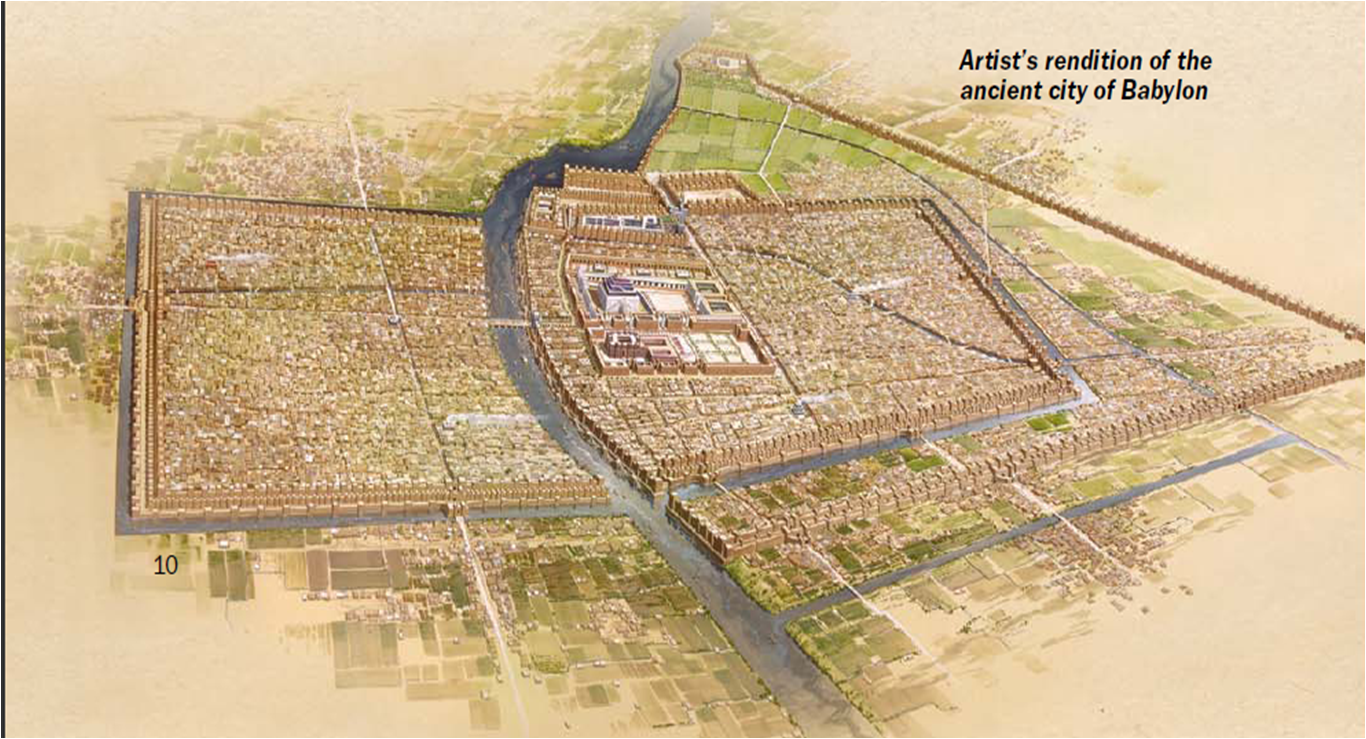 Jeremiah 51:31 shew the king of Babylon that his city is taken
“After conquering numerous other enemies, Cyrus faced his greatest challenge— the huge walled city, 24 square kilometres of Babylon. Xenophon records the following surmising of Cyrus, ‘But I am sure I cannot see how any one could take by storm, walls so massive and so high.’
“Both Herodotus and Xenophon record that Cyrus resolved to lay siege on Babylon and wait until the people within the walls ran out of food. He was informed (perhaps by Gadatas and Gobryas—two defectors from Babylon) that the great city had more than 20 years of food supplies. Cyrus became frustrated, but then a plan came to him, perhaps from one of his advisers or perhaps from his own design. The walls were too thick to break. The gates were too strong. There was only one fathomable way to get in—the Euphrates River, which went through the middle of the city.
“Years earlier, Babylon had been ruled by a queen named Nitocris. Because the city was bisected by the Euphrates River she wished to build a bridge from one side to the other in the middle of the city. In order to accomplish this goal, she first had to reduce the water level of the Euphrates enough to allow workmen to build the bridge. She devised a massive plan that would do the trick—an artificial lake far upriver into which the Euphrates could be diverted. It was done and the workmen were able to set the bridge's foundation stones in the bed of the river.
“The plan that came to Cyrus included a similar feat. The lake, now a marsh, having been closed off, would be reopened and the Persian army would wade into the city under the massive walls of Babylon. So Cyrus deployed half of his regiment to where the Euphrates entered the city and half to where it exited. He then took a small number of men to where the trench to the lake had, over the previous few weeks, been excavated and had them open the mouth of the trench into the Euphrates.
“There was one fatal flaw in Cyrus' plan. The walls of Babylon extended far upstream along the banks of the river. If the Babylonians witnessed the water level diminishing and saw the Persian army entering the river, they would gather along the walls and annihilate the Persians with a barrage of ammunition.
“Cyrus' way of alleviating this problem was to wait for two important factors— darkness and drunkenness.
The Night of the Attack
“In the biblical book of Daniel an amazing story is recorded. Belshazzar threw a huge banquet for 1000 of his leading lords. Huge amounts of food and wine were consumed and the entire city was caught up in the celebration.
“To demonstrate his power and security, despite the siege outside the city walls, Belshazzar called for the confiscated goblets from Yahweh's temple in Jerusalem, had them filled with wine and joined with his lords, wives and concubines in drinking wine from these sacred vessels. Moments later a hand appeared and wrote on the wall.
“The message, ‘Mene, Mene, Tekel, Parsin,’ was unintelligible to the leading scholars and astrologers in Babylon. The queen remembered Daniel and the way he had helped previous kings. Daniel was called in and, after berating Belshazzar for his blatant misuse of holy relics, he translated the handwriting on the wall: ‘This is what these words mean: Mene: God has numbered the days of your reign and brought it to an end.
“Tekel: You have been weighed on the scales and found wanting. Peres: Your kingdom is divided and given to the Medes and Persians’ (Daniel 5:26-28).
“Moments later, perhaps even while Daniel was explaining the divine message to the king, the Persian army waded under the walls and climbed the riverbank into the heart of Babylon.
“Thus, Cyrus' men had no challenge to overcome in entering the great city.
“Cyrus had given direct orders that none of the city folk were to be unduly harmed. The Babylonian traitors— Gadatas and Gobryas—led the army to the palace because they knew the city well. When they arrived, Belshazzar was killed while trying to defend himself.
“A few days later, having completed the journey back from the lake, Cyrus entered Babylon and was greeted with open arms and much rejoicing by the Babylonian people. Liberation had arrived! Every record referring to Cyrus' interaction with subjected nations reveals a benevolent leader who held high the concerns of his new people.
“And, as prophesied by Isaiah, Cyrus sent many Israelites back to Jerusalem with funds to rebuild the temple that had been decimated by Nebuchadnezzar.
“He also sent back the holy relics that had been stolen.” (https://www.hopechannel.com/read/cyrus-the-great)
Jeremiah 51:57 I will make drunk her princes, and her wise men, her captains, and her rulers
Belshazzar the king made a great feast to a thousand of his lords, and drank wine before the thousand…
Then they brought the golden vessels that were taken out of the temple of the house of God which was at Jerusalem and the king, and his princes, his wives, and his concubines, drank in them.
They drank wine, and praised the gods of gold, and of silver, of brass, of iron, of wood, and of stone. (Dan. 5:1-4)