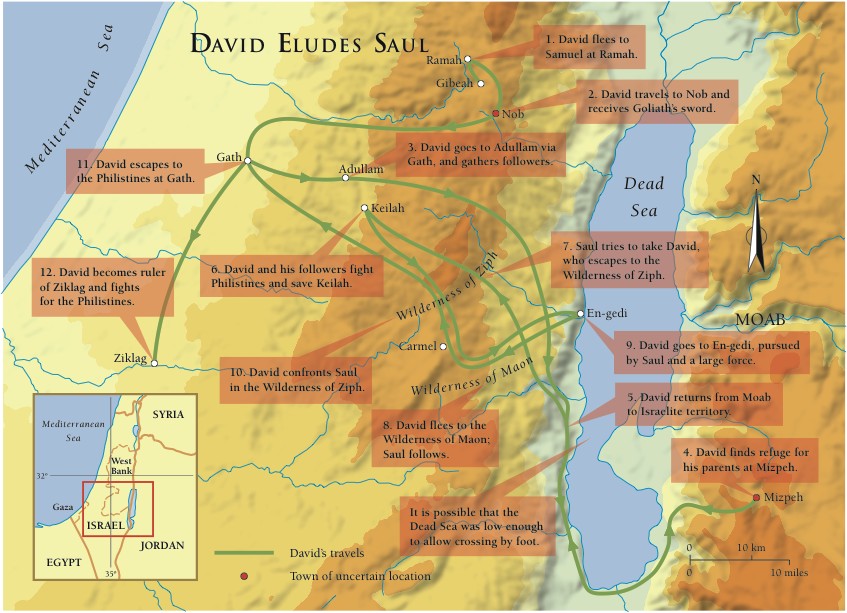 (Barry J. Beitzel, ed., Biblica: The Bible Atlas, [Australia: Global Book Publishing, 2006], 231)
1 Samuel 24:10 I will not put forth mine hand against my lord; for he is the Lord’s anointed
“David’s adversary was delivered into his hands. With one thrust of his spear, David could have been rid of Saul and the discomforts of life that Saul had caused him. His men urged him to do it. But he wouldn’t…
“Nearly the same scenario repeated itself two chapters later: Saul came down against David with 3,000 of his troops. At night, when they were sleeping, David and one of his men snuck into Saul’s camp and came to Saul’s side. David’s companion urged him to take up Saul’s spear and thrust it through him, to put an end to the misery Saul had been causing him. But David wouldn’t. ‘The Lord forbid that I should stretch forth mine hand against the Lord’s anointed,’ he answered… (1 Sam. 26:16-20)
“David’s response in each of these situations fills me with wonder. How is such a response possible? How can we not only resist vengeance toward those who have harmed us but apparently feel no desire for it? David’s response at the news of Saul’s death in Second Samuel chapter 1 makes this question even more salient, for when he heard that both Saul and Jonathan had been killed in battle, he wept for Jonathan and Saul alike: ‘Then David took hold on his clothes, and rent them… and wept, and fasted until even, for Saul, and for Jonathan his son… And David lamented with this lamentation over Saul and over Jonathan his son… Saul and Jonathan were lovely and pleasant in their lives, and in their death they were not divided: they were swifter than eagles, they were stronger than lions… How are the mighty fallen…!’ (2 Sam. 1:11-27)
“What is striking about David’s response here is that there is almost no difference in his expressed feelings for Saul and for Jonathan. He is devastated by both of their deaths. One would expect him to feel that way about Jonathan, but Saul? How could David’s feelings for one who tried to destroy him be so similar to the feelings he had for one who loved him as his own soul?
“Accordingly, the last half of First Samuel presents us with two intriguing questions: How is it possible that two men, Saul and Jonathan, could respond so differently to their loss of the throne? And how is it possible that one man, David, could respond with the same loving attitude toward two men, Saul and Jonathan, whose treatment of him was so different? What makes such responses possible?
“Few questions are more pertinent to our lives, for who has not felt envious, angry, or embittered toward others? Such feelings seem to haunt our lives, but Jonathan and David suggest that they don’t have to. Their lives testify of a better way.” (James L. Ferrell, The Hidden Christ, [Deseret Book, 2009] 163-165)
1 Samuel 24:12 The Lord judge between me and thee… but mine hand shall not be upon thee
Abraham H. Cannon
We of all people upon the face of the earth should be filled with that love of God which cannot be overcome by the acts of men, even though these acts are injurious to us. We should be able to say when wrong is done us, "The Lord judge between me and thee;" and from our hearts there should be crushed out every feeling of bitterness and hatred; for it we allow a spark thereof to remain, it will rankle, and it will grow as the weed, choking out the good seed and preventing the development of the power of the Spirit of God within us. (Brian H. Stuy, ed., Collected Discourses, 5 vols. [Burbank, Calif., and Woodland Hills, Ut.: B.H.S. Publishing, 1987-1992], vol. 4, February 2, 1896)
Joseph Fielding Smith
We hope and pray that you will go from this conference to your homes feeling in your hearts and from the depths of your souls to forgive one another, and never from this time forth to bear malice toward another fellow creature. We ought to say in our hearts, let the Lord judge between me and thee, but as for me, I will forgive. Go home and dismiss envy and hatred from your hearts; dismiss the feeling of unforgiveness; and cultivate in your souls that spirit of Christ that cried out upon the cross, "Father, forgive them; for they know not what they do." (Luke 23:34.) This is the spirit that the Latter-day Saints ought to possess all the day long. It is a good thing to be at peace with the Lord. (Conference Report, October 1969, Third Day—Morning Meeting, 109)
Spencer W. Kimball
Sometimes the spirit of forgiveness is carried to the loftiest height to rendering assistance to the offender. Not to be revengeful, not to seek what outraged justice might demand, to leave the offender in God's hands this is admirable. But to return good for evil, this is the sublime expression of Christian love. (The Miracle of Forgiveness [Salt Lake City: Bookcraft, 1969], chap 19)