"'And they came unto Haran, and dwelt there' for a season, gathering 'substance' and 'souls' (Gen. 11:31; Gen. 12:5). From the area of Haran, in the Old Testament region of Padan-aram, also came Rebekah the wife of Isaac (Gen. 24) and Jacob's wife Rachel (Gen. 28-29). ("Ancient Lands: A Photo Essay," Ensign, Sept. 1980, 33)
Gen 12:5 Abram took Sarai his wife... the souls that they had gotten in Haran
Hugh Nibley
The souls are the ones they had converted in Haran. He and Sarai immediately started work at conversion... According to the Sefer ha Yashar, the people of the land of Haran saw that Abraham was good and just toward God and man. Men from among the inhabitants of the land of Haran came to him and attached themselves to him, and he taught them discipline of the Lord and his ways. We have him here in Facsimile No. 3 teaching astronomy and the principles in the court of Pharaoh. "As he moved on his way, each altar raised by him was a center of activities as a missionary, he and Sarai diligently preaching and making proselytes wherever they went and pitched their tents." Midrash 39 says, "Abraham converted the men and Sarah the women." There was a tradition that all proselytes and heathen are the descendants of the infants of the pagan mothers, whom Sarah nursed. But all the followers of Abraham, including Abraham himself, were converts. It doesn't come by blood. As Lehi and Nephi explained to their sons, he who is righteous is favored of God. But you had to accept it. Abraham founded his Zion, and those who wished to follow became the followers of Abraham. By special rites and ordinances they were adopted into the family. (Ancient Documents and the Pearl of Great Price, edited by Robert Smith and Robert Smythe [n.p., n.d.], [p.11].)
Gen 12:6 Abram passed through the land unto the place of Sichem
"He journeyed southward until he reached the land of Canaan, the ancient name for the Holy Land. There the Lord appeared to him and promised to give him that land. (See Gen. 12:6-7.) Canaan became Abraham's home and that of his posterity for several hundred years, until Jacob's children moved to Egypt. Moreover, it became a holy place to the patriarchs, for the Lord often spoke and covenanted with them there...
"The ancient town of Shechem lies between Mt. Gerizim (left) and Mt. Ebal (right). The modern city of Nablus surrounds it. Shechem and the plain of Moreh before the mountains were Abram's first stop in Canaan. There, 'the Lord appeared unto Abram, and said, Unto thy seed will I give this land: and there builded he an altar unto the Lord.' (Gen. 12:6-7.) Jacob later bought a plot of land in Shechem and lived in the region for a time. Centuries later, the children of Israel carried Joseph's bones from Egypt and buried them in the plot Jacob had purchased. (See Gen. 33:18-19; Gen. 34; Gen. 50:25-26; Josh. 24:32.)" ("Land of the Patriarchs," Ensign, Jan. 1990, 38) 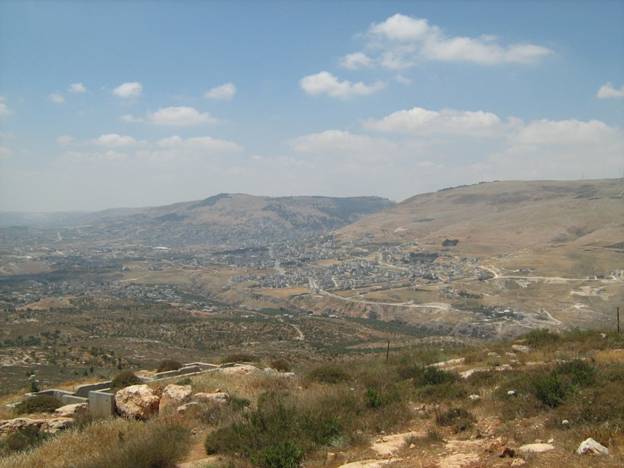