Genesis 13:1 Abram went up out of Egypt... into the south

Who is the voice of the writer of Genesis? You may think it is Moses but that is not correct. The voice for the first 5 books of the Old Testament is an unidentified scribe or scribes. The record may have been written originally by or under the direction of Moses but some later individual recorded the stories. Evidence is seen for this in this particular verse. "Abram went up out of Egypt... into the south." Well, what is the south? In the world of the scribe, the south is the southern part of Israel's inheritance in the land of Canaan. But Israel hasn't been born yet!
"[The] teller of the story lived much later than the patriarch's time, such as calling Terah's home town 'Ur of the Chaldeans,' for Chaldeans did not arrive there until hundreds of years after Abraham. This way of identifying which Ur is meant made sense for later hearers, but is not a phrase Abraham would have used...
"Scholars recognize that the Pentateuch was written much later than the events described." (Biblica: The Bible Atlas [Australia: Global Book Publishing, 2006] p. 104)
These geographic anachronisms may seem trivial, but they are not. One of the reasons the Pentateuch lacks important priesthood doctrines is that the scribes responsible for the final version understood only the priesthood of Aaron. Therefore, the significance of the Patriarchal Priesthood, the importance of Melchizedek, the power of Enoch, etc. are not found in Genesis. It is not Moses' fault, for he understood the higher priesthood and the higher law, but the scribes who wrote the final Hebrew version did not.
Genesis 13:1-2 Abram was very rich
Elder Mark E. Petersen taught, "There were several reasons why Abraham became rich. One must have been that he was a highly intelligent man, well educated in Ur, and trained no doubt in business as well as ranching. His business skill could have accounted for much of his successes, as it does with others. But there was a more important reason: He served the Lord!" (Abraham, Friend of God, p. 72)
Symbolically, Abram goes to Egypt because of a famine; he leaves Egypt a wealthy man. This is a type and shadow for the children of Israel, who are driven to Egypt by a famine, but leave Egypt 430 years later taking the spoil of Egypt with them (Ex. 12:35-36).
"When Abraham and Sarah returned after their trial in Egypt to that sacred land promised them, they went 'rich in cattle, in silver, and in gold,' returning first to Bethel-the house of God-and its altar that they might call upon the name of the Lord. (Gen. 13:2-4) Similarly, before the children of Israel left Egypt to return to the promised land to rebuild their temple and call upon God, they were directed to obtain from the Egyptians their 'jewels of silver, and jewels of gold.' (Ex. 11:2.) When the Jews were freed from their captivity in Babylon to return to Palestine to rebuild the Holy City and its temple, the treasure houses of that great nation were opened to them, and they returned laden with silver and gold. (Ezra 7:15-21.) Thus, when Israel returns to claim the blessings of the temple in the last days, should they not return with their rich treasures as their forebears did before them?" (Kent P. Jackson, ed., Studies in Scripture, Vol. 8: Alma 30 to Moroni [Salt Lake City: Deseret Book Co., 1988], 194, footnote 3)
Genesis 13:3 he went... where his tent had been at the beginning, between Beth-el and Hai
Bethel and Hai, or Ai, are located less than 15 miles north of Salem, the future site of Jerusalem. See map below. 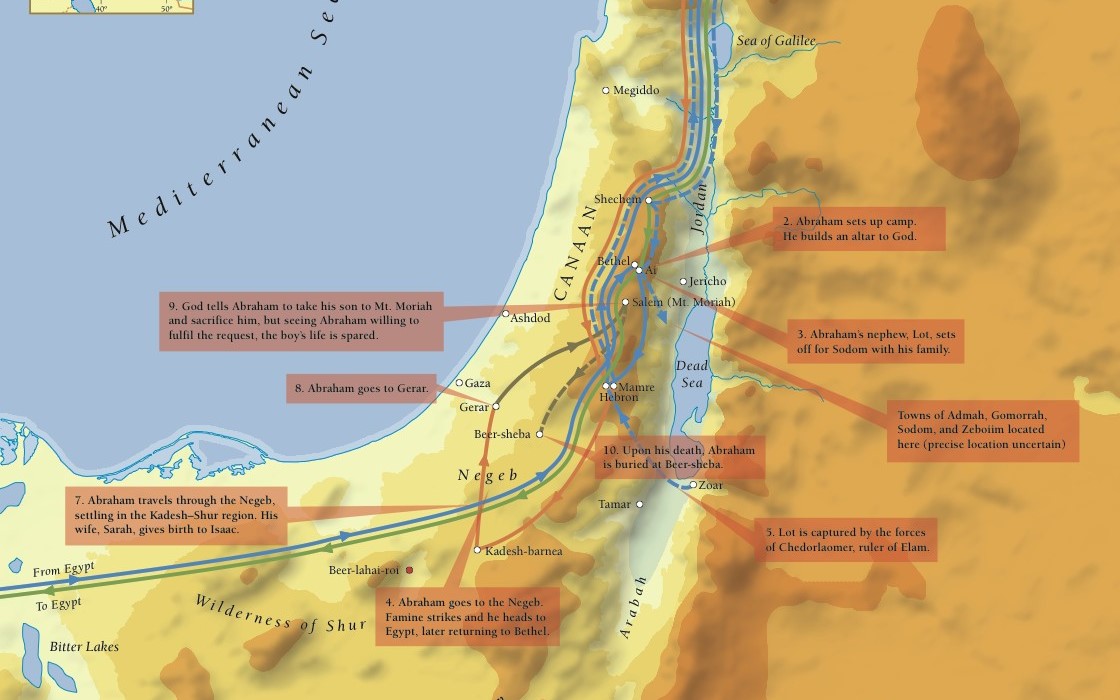